skip to main | skip to sidebar

Golden Age Hero - The Magic of the Red Dragon 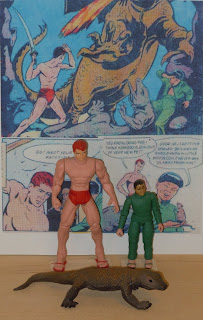 I've had a little trouble with this blog entry trying to put some of the material together but here goes. The Red Dragon was really Bob Reed, who's parents were murdered by the Japanese. He subsequently goes and studies ancient sorcery in Tibet so that he can develop enough power to seek revenge against the Japanese. He could activate his powers by clasping his hands together and reciting the words, "Po-She-Lo." These powers gave him the ability of flight (for both himself and others), firing destructive beams of energy and generating force fields. Bob has some help along the way in the form of a young Chinese boy named Ching Foo and his pet Komodo Dragon. In one story the Japanese challenge Red Dragon to defeat their champion, the Yellow Dragon. Turns out it's a fire-breathing dragon which is a construct operated by a couple of men. The Red Dragon defeats it anyway and the Japanese soldiers as well. Red Dragon initially appeared in Super Magician Comics #8 by Street and Smith and later got a book of his own so apparently he was a fairly popular character. He ran in print from 1943 to 1949 and concentrated his adventures in the Pacific theatre. One of the reasons I had a little trouble finding information about him is apparently because a lot of the "superhero" related sites don't cover him - maybe considering him more of a magic act than a super guy. As for the figures, Red Dragon himself combined a Toy Biz Savage Land Angel figure and the head from a Playmates young Riker, which is actually a pretty obscure figure. Since he was wearing sandals in the story I had I cut bass wood sandals for him and then glued them to his feet before gluing him to the base. Ching Foo was made using the GI Joe head from their Airborne figure and various body parts from GI Joe and similar action figures. I fished around a while for a good Komodo Dragon but eventually found one at a craft store.

Nauticus
Retired from government in 2005 and have been devoting myself to writing, both fiction and non-fiction